Here at The Irish Store, we are proud to present a stunning new take on the iconic Aran Sweater, designed exclusively for us by the renowned Irish New York-based fashion designer, Daryl K. 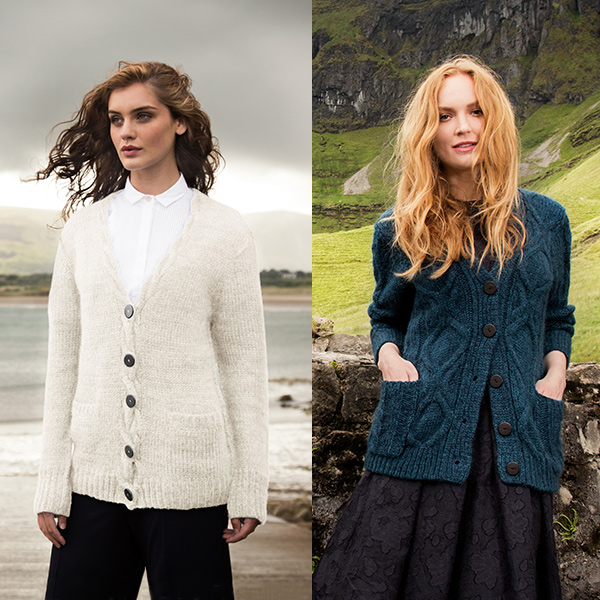 Hi everyone. Lulu here. I hope you’re all well and rested after the St.Patrick’s Day festivities last week.

This week I am so excited and thrilled to be launching a very special collection at The Irish Store. We’ve teamed up with the renowned Irish fashion designer and my dear friend Daryl K who has re-imagined the classic Aran cardigan with stunning results. I just wanted to share the story of how this collaboration came about, but before I do, let’s go back to the beginning…..

The Aran Sweater: From Humble Beginnings to Iconic Status

Our beloved Aran sweater was created out of necessity. They were knitted by the women of the Aran Islands using unscoured wool which retained its natural oils, so making the sweaters water-resistant. Originally worn by fishermen, they gave much-needed protection from the unforgiving wild Atlantic Ocean.  According to island folklore, every stitch tells a story and is rich in local symbolism.  Throughout the 1930s and 40s, they gained popularity around the world. Steve Mc Queen wore one and made it instantly cool but when Grace Kelly appeared in an Aran sweater on the cover of Vogue in the 1950s, this humble Irish sweater was catapulted to iconic status, cementing its reputation as a fashion classic.

Daryl K: A Return to Her Irish Roots

Daryl Kerrigan was born and raised in Dublin and studied fashion design at the National College of Art and Design, an Irish haunt for burgeoning artists and fashion types. It was around this time that we met when I was about to set up my first gift delivery business. In 1986 she made the move to New York where she started out as a costume designer in film before setting up a fashion shop with a production studio out the back in the East Village in 1991. In the years that followed, Daryl K’s brand grew, drawing celebrity advocates and a cult following on New York’s fashion scene. Her fashion shows were legendary for their unusual staging. I was lucky enough to attend one of the shows which were staged on a rooftop on 5th Avenue in Manhattan! More than 20 years on, her collections are as popular as ever and her iconic Hip Hugger Bootleg Jeans have become a must-have wardrobe staple for celebrities and fashionistas alike. Although Daryl has lived in New York for 30 years now, I know that her love of Ireland has never diminished, so to me, it seems fitting that she has returned to her Irish roots to re-imagine the Aran cardigan exclusively for The Irish Store.

The Inspiration- A Walk On A Donegal Beach

“One time myself and Lulu were taking a walk along this beautiful beach in Donegal. We were talking about Aran sweaters and I was telling Lulu about how I really wanted to design an Aran in a new yarn. I wanted it to be light, airy and soft, and to have the colors of this dramatic Irish seascape.” Daryl K

Daryl comes back to Ireland as much as she can and our favorite way to catch up when she comes home is to take a walk by the sea, usually in Donegal. We constantly marvel at its breathtaking beauty and the ever-changing rich hues of bottomless blues, deep greens and slate grays of the ocean, coupled with the sandy whites, golds and creams of the seashore.  As Daryl says, it was on one of our walks that the idea of re-imagining the Aran sweater was born……..

The Boyfriend Cardigan by Daryl K

Boyfriend Cardigan by Daryl K, available in blue and charcoal for $199.

The first of Daryl’s two stunning designs is her unique take on the ever-popular boyfriend cardigan. Here, Daryl takes the traditional Aran diamond stitch and gives it a new lease of life to create an Aran cardigan like no other. The cut is relaxed yet ultimately flattering, perfectly showcasing the Daryl K trademark aesthetic of comfort and style. It comes in Ocean Teal (blue), or Atlantic Slate (charcoal).

“This Boyfriend Aran cardigan is a just a totally classic look, perfect for a walk on the beach in Ireland.” Daryl K

The Aran Cardigan by Daryl K

The Daryl K Aran Cardigan is irresistible in its stylish simplicity. Here, Daryl pays homage to the classic Aran cable stitch using an oversized version to trim the plain knit main body. Again, the fit is soft and airy with a generous v-neck and comes in Ocean Teal (blue) and Aran Island Stone (cream). Both cardigans come in a luxurious mohair mix yarn.

“Being an Irish person living in America, you have a very strong feeling for the love that people here have for Ireland so this Aran cardigan connects me very much back to Ireland.” Daryl K

I know from talking to our extended The Irish Store family that when you wear a piece of Aran knitwear, there’s an undeniable connection to Ireland. It has been so exciting for me to have Daryl K come on board and give us her unique take on an Irish classic. A word of warning though, when you buy one of Daryl’s designs, you won’t be able to take it off. I got the Boyfriend Cardigan in Ocean Teal and I haven’t stopped wearing it!

Thanks for stopping by and do check out my blog next week when I’ll be reporting from our Spring/Summer photo shoot in Wicklow.

Behind the Scenes At The Irish Store Summer Photo Shoot

The Causeway Collection. The Men’s Edit