7 Wonders of Ireland. Journeys Around Ireland With Lulu.

Hi Everyone. I hope I find you all well. So this week I’m daring to name my 7 wonders of Ireland. Before I begin I must stress that this list is by no means definitive! Let’s face it, we’ve so much to choose from in Ireland so I’m sure not everyone will agree with my selection. But the following is my personal rundown of absolute must-sees on any trip to Ireland. It would be great to hear yours too! 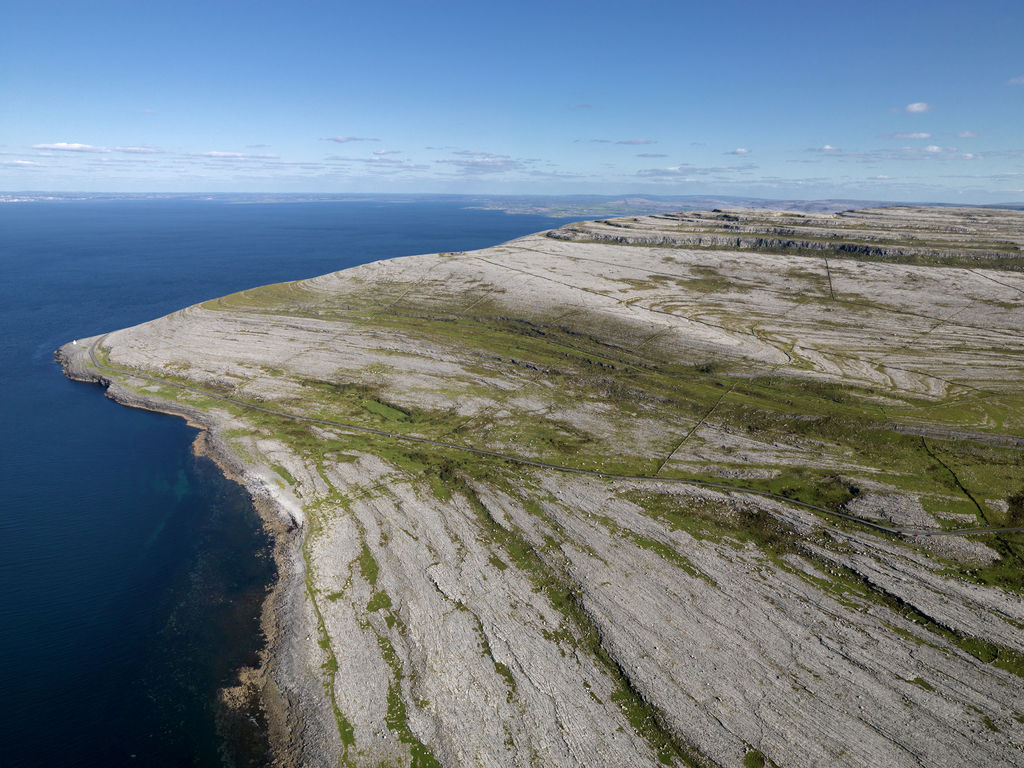 First stop is the awesome and spectacular Burren in county Clare and south county Galway. Taking its name from the Irish word “Boireann” which means “great rock”, this stunning Karst terrain consists of rolling hills of limestone pavements with crisscrossing cracks. One of Ireland’s 6 national parks, it covers 250 square kilometres.

View from afar and get the full effect of this otherworldly lunar-like landscape or get up close and feast your eyes on the wealth of arctic, Mediterranean and alpine plants that live side by side due to the unique conditions and formation of this rare and magical landscape. 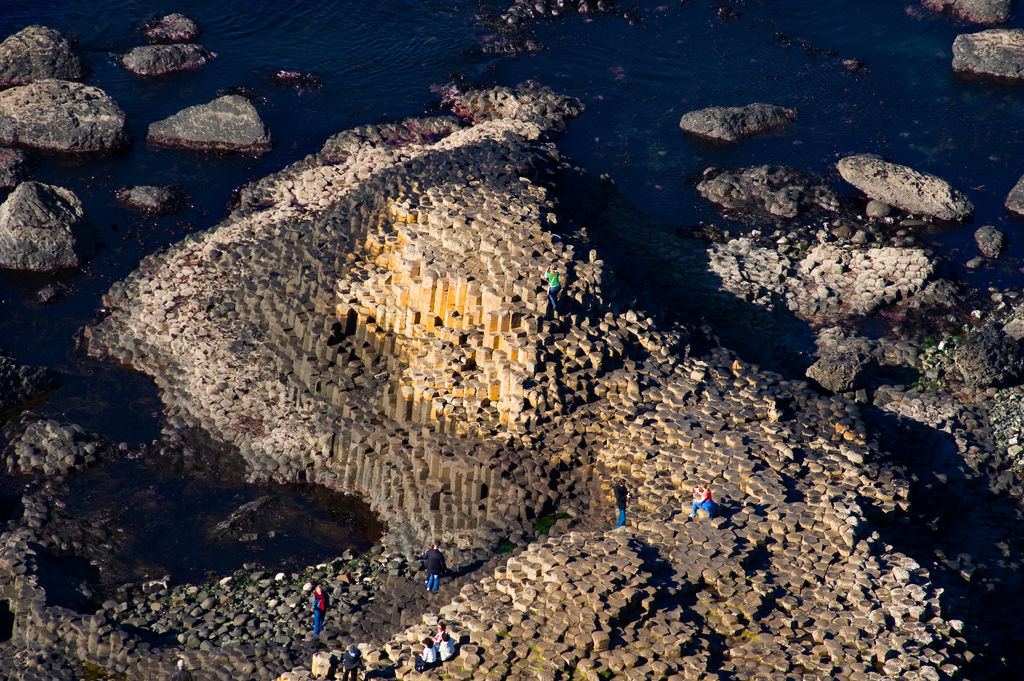 Are you ready for more “awesome” and “spectacular”? Well, let’s head to the north of the country to county Antrim and the Giant’s Causeway. This geological wonder consists of 40,000 basalt columns, the result of an ancient volcanic eruption.

Irish legend has it that the causeway is the remains of a path made by Irish mythological giant Finn Mac Cool when he was challenged to go into combat with his Scottish rival giant, Benandonner. The only UNESCO World Heritage Site in the north of Ireland, there’s a definite edge of the world feeling in this stunning location.

Related:  Happy Holidays to All! Christmastime in Dublin. 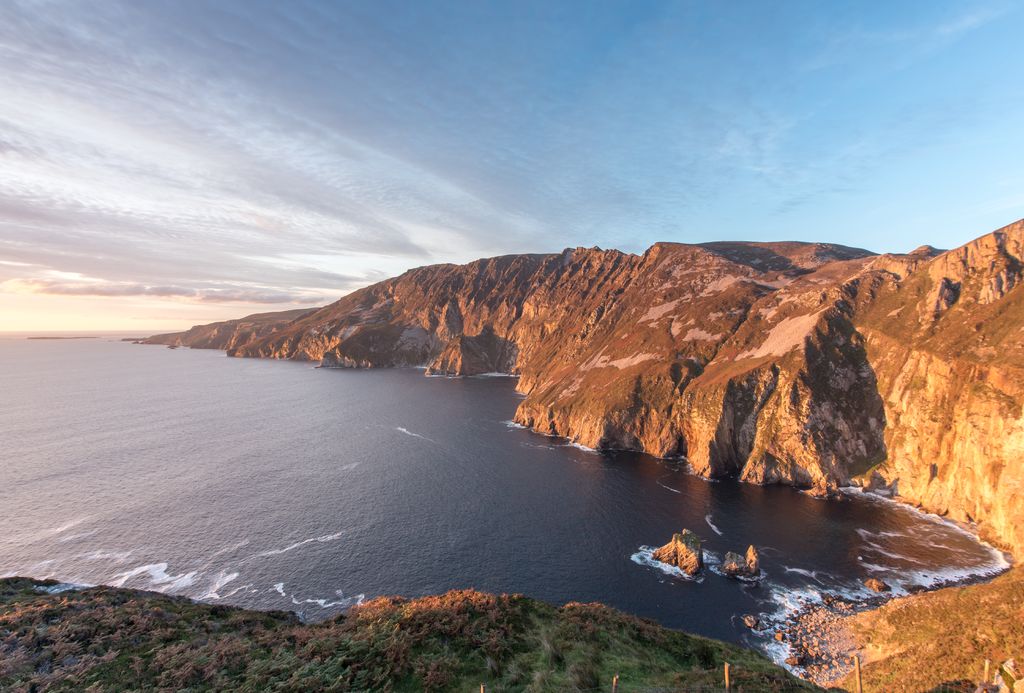 So let’s have some more of that edge of the world feeling at Ireland’s (and Europe’s) highest sea-cliffs. Their highest point stands at a staggering 1998 feet- 3 times higher than their better-known cousins in County Clare, the Cliffs of Moher!

Venturing beyond the main viewing point to One Man’s Pass is strictly for the experienced hiker. On a clear day, you can enjoy astounding views of Sligo, Leitrim and even the mountains of Mayo. 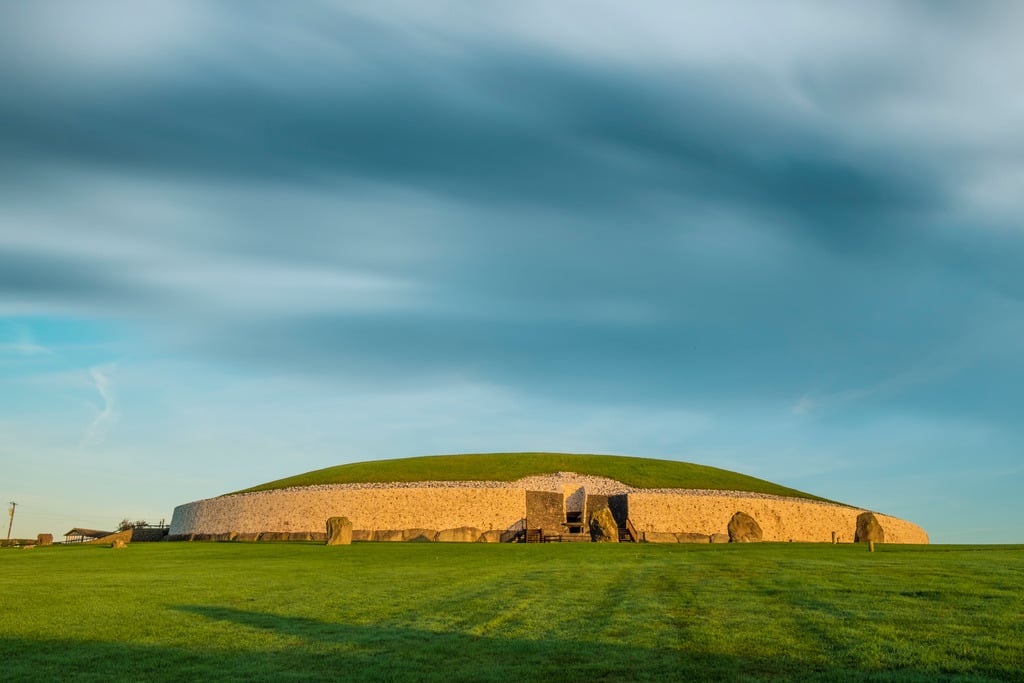 Truly awe-inspiring, the passage tomb at Newgrange hails from the Stone Age and was built some 5200 years ago, predating the Pyramids and Stonehenge by some 500 years. Measuring 85 meters in diameter and 13.5 meters high it is surrounded by 97 kerbstones bearing stunning examples of megalithic art.

The passage and chamber are aligned with the rising sun at the Winter Solstice on 21 December when they are spectacularly illuminated. A stunning feat of ancient engineering!

5. The Rock of Cashel 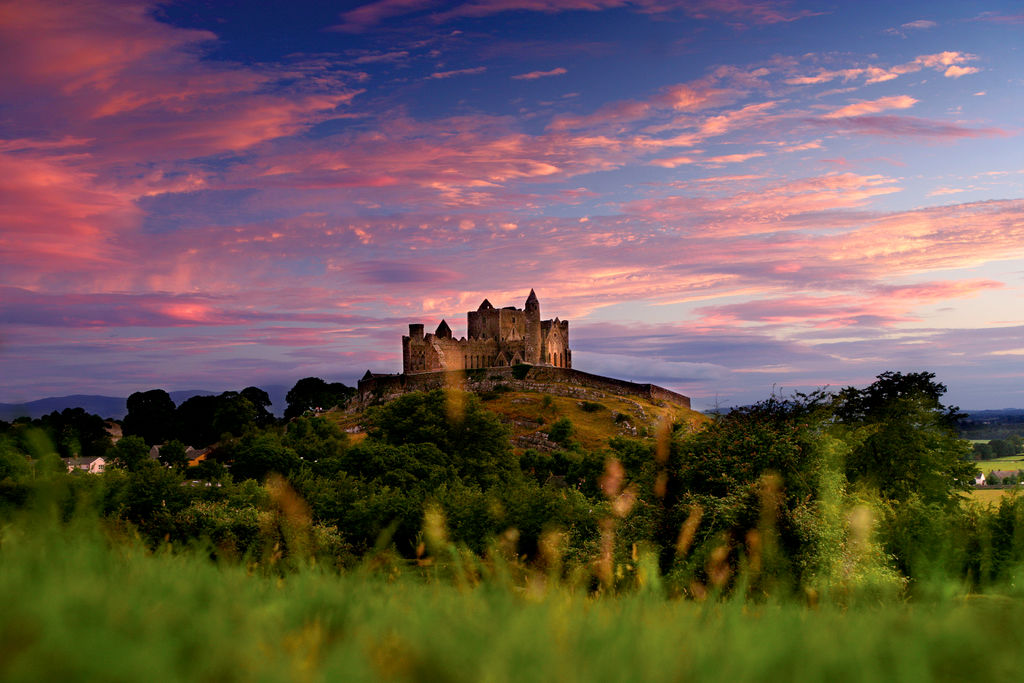 The iconic Rock of Cashel has to be on any 7 wonders of Ireland list. It rises out of the rolling landscape like something out of a fairy tale. Also known as St. Patrick’s Rock (Carraig Phádraig), legend has it that the rock landed here when St.Patrick banished Satan from a cave at Devil’s Bit mountain. The story goes that the devil took a bite out of the mountain and spat the rock to its current location!

The Rock of Cashel is also the place where it is claimed St Patrick converted the King of Munster. Indeed it was the seat of the of high kings of Munster for centuries until the Norman invasion.

Related:  Journeys Around Ireland With Lulu - The Delights of County Down 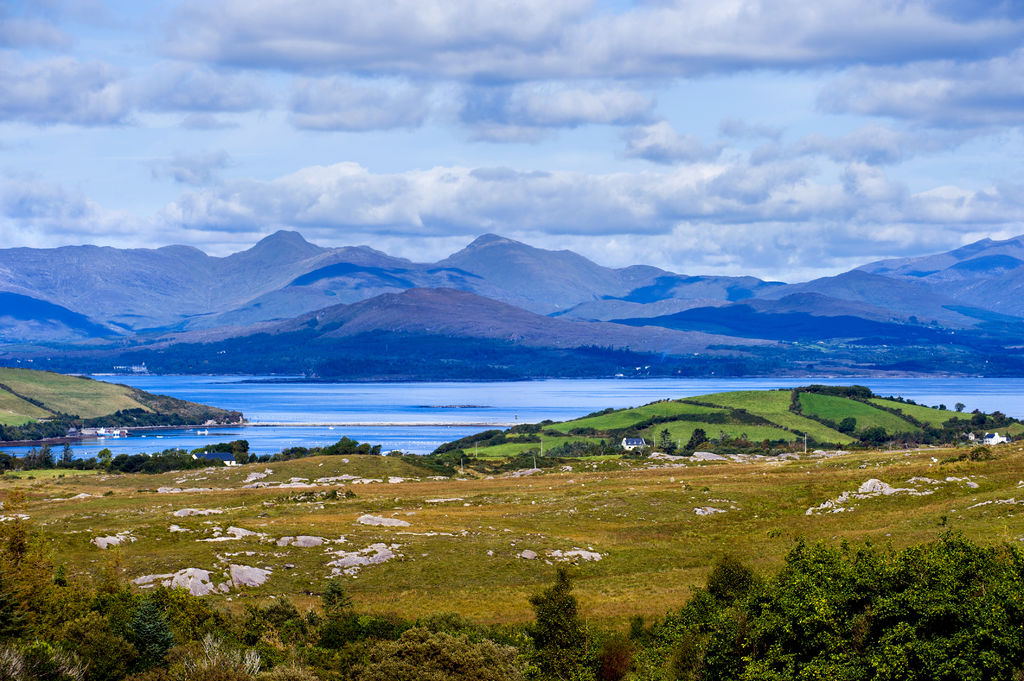 This iconic Irish mountain range on the Iveragh peninsula in County Kerry boasts no less than 27 peaks including Ireland’s highest, Carantoohil standing majestically at 3400 feet. So where did the name MacGillycuddy’s Reeks come from? Well, it originates from the 18th century when this part of Ireland was controlled by the Mac Giolla Mochuda clan. Macgillycuddy is the anglicized version of the name and the word reek is derived from the old English word rick meaning stack. 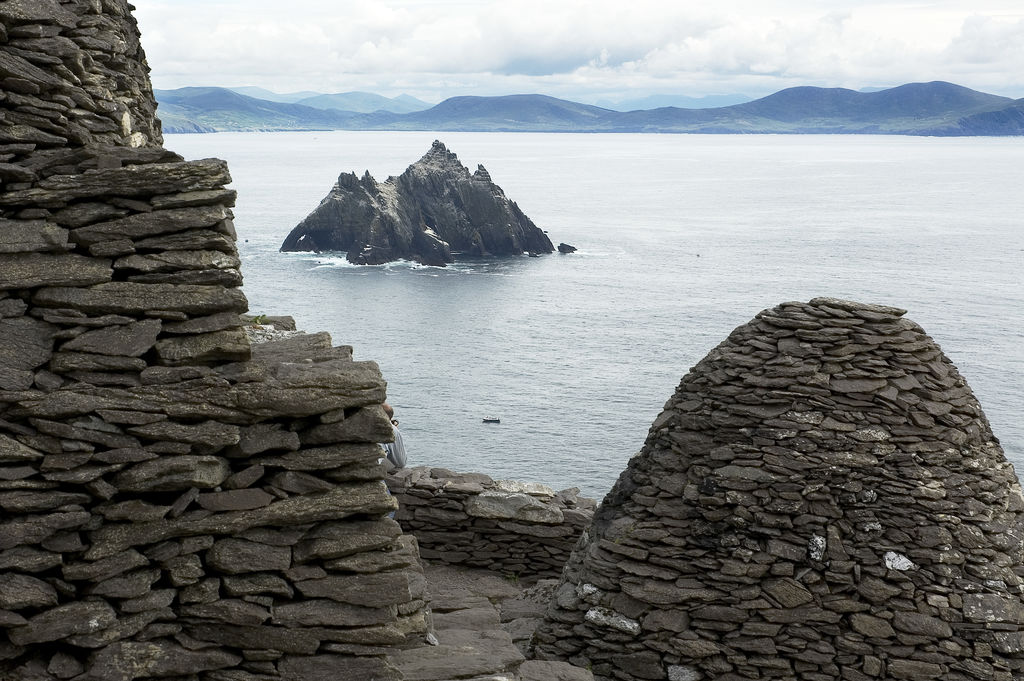 Our last stop on our 7 wonders of Ireland journey are the truly awesome Skellig Islands. The smallest of the islands is not accessible to the public but a boat ride to the magnificent Skellig Michael should be on everyone’s bucket list. The ancient monastic settlement here is incredibly well preserved. No humans have lived here since the monks left in 1100 who even escaped the ravages of the Vikings. Maybe someone was looking down on them! Now the birds have taken over, especially the puffins in Spring. It is now a UNESCO World Heritage Site. A truly special part of the world.

Well, that’s all from me for this week. Shop our exciting range of Irish sweaters, Irish jewelry and Irish gifts at The Irish Store and get a 10% discount when you use BLOG10 at the checkout.

A Little Piece of Ireland On the Wild...