Hello Everyone. I hope you all had a good week. So after last week’s tour of my favorite Irish beaches, we’re going to take a trip well above sea-level this week and explore some of my favorite Irish mountains. Most of Ireland’s mountains are in the coastal counties although there are some gems inland which we’ll be visiting too. We’ll be exploring all four corners of the country so put on those hiking boots and let’s get started!

We’ll start in the north of the country  the magnificent Mournes. This majestic mountain range forms the backdrop of county Down and a clear day they can be seen from as far away as Dublin. The highest peak is Slieve Donard, standing at 2790 feet. On particularly clear days you can see as far as the Isle of Man, mountains in the Lake District in England and Snowdonia in Wales. A paradise for hikers and rock climbers, these iconic mountains were also the inspiration for the Narnia books by C.S. Lewis. When you see them covered in snow in winter, you can easily see why. 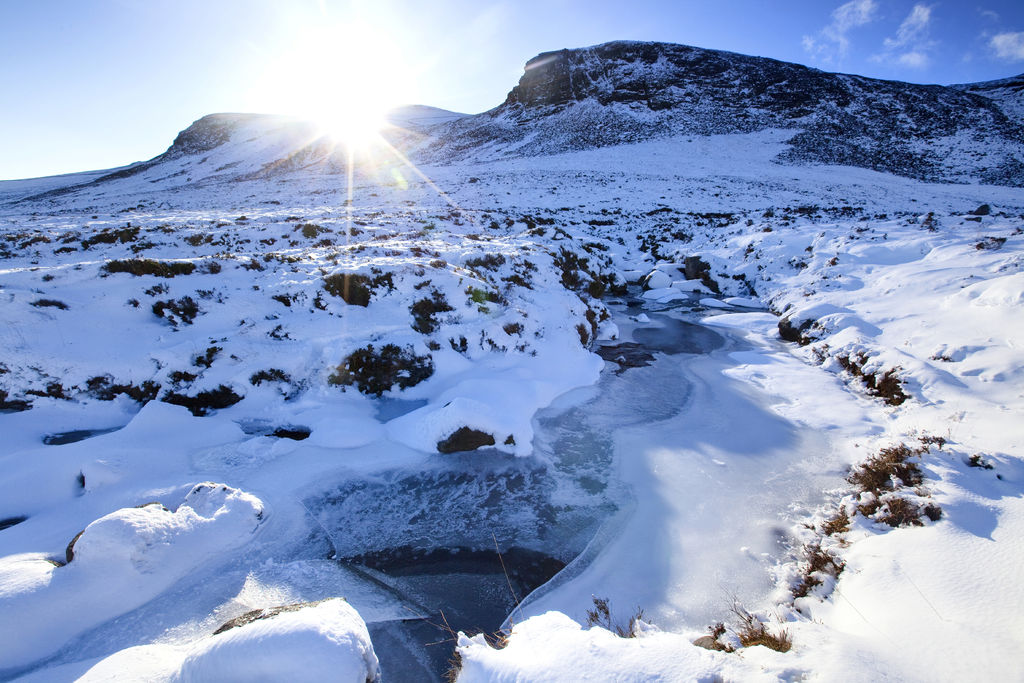 Taking a short trek further north now and Divis Mountain in county Antrim. Along with Black Mountain and Cavehill, Divis Mountain forms an impressive backdrop to the city of Belfast. It stands at 1,568 ft and commands stunning views of the city below, all the counties of Ulster and even Scotland and England can be spotted on a clear day.

The Sperrin Mountains are Irelands’s largest mountain range, Running right through the county of Tyrone from Strabane in the west to the banks of Lough Neagh in the east. Wild and unspoilt, they are a walkers paradise with their many valleys and rivers and a drive through them on their sometimes roller coaster roads is a real treat. In fact, National Geographic included them in it’s Top 101 Scenic Drives in The World. Legend also has it that St.Patrick banished the last of the snakes from Ireland from a pool in Banagher Glen in the Sperrins.

Staying north but heading west now into county Donegal. The mighty Mount Errigal stands at 2,464 ft near Gweedore. It is the highest peak in the county and is part of the Derryveagh Mountain range. It is also the tallest of the mountain chain known as the Seven Sisters. If you’re lucky enough to catch it as the sun sets, you’ll be mesmorized by it’s pinkish glow due to the illumination of it’s quartzite rock formation.

So if I have to pick a favorite of all the Irish mountains it would have to be the majestic Benbulben in my beloved county Sligo. Ireland’s “Table Mountain” is part of the Dartry Mountain Range in the heart of Yeats Country. To scale it’s heights is strictly for the very experienced hiker. I love to stroll around it’s foothills where as well as stunning mountain and Atlantic ocean views, you get the added bonus of lush woodlands too.

Next, we’re heading south into neighboring county Mayo and the iconic Croagh Patrick. From the Irish Cruach Phádraig, meaning “(Saint) Patrick’s Stack”, Croagh Patrick stands at 2057 feet, commanding stunning views over Clew Bay. Croagh Patrick is Mayo’s 3rd highest mountain but without doubt it’s most famous peak. Legend has it that it was from here that St Patrick banished the snakes from Ireland and fasted for 40 days as penance. To this day, flocks of pilgrims from all over the world gather at the mountain on the last Sunday in July. 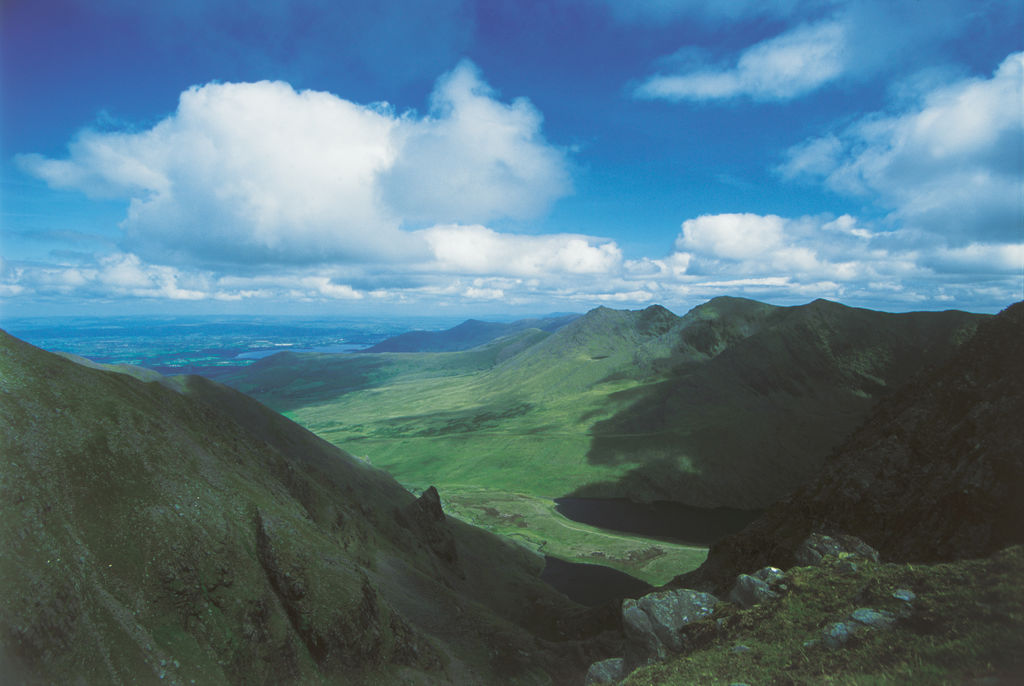 Time to venture into the gorgeous Kingdom of Kerry and the MacGillycuddy’s Reeks mountain range. Here you will find Ireland’s highest mountain, Carantoohil standing majestically at 3400 feet. Sweeping down to the Lakes of Killarney, the scenery in this part of the world is nothing less than breathtaking.

We’re heading eastward  now to county Tipperary and Ireland’s largest inland mountain range. The tallest peak o fthe Galtee mountains is Galtymore which stands at 3009 ft.  The stunning Glen of Aherlow lies between this mountain range and Slievenamuck forming part of Ireland’s Golden Vale. This particular area is hailed as the best land in the Ireland for dairy farming. 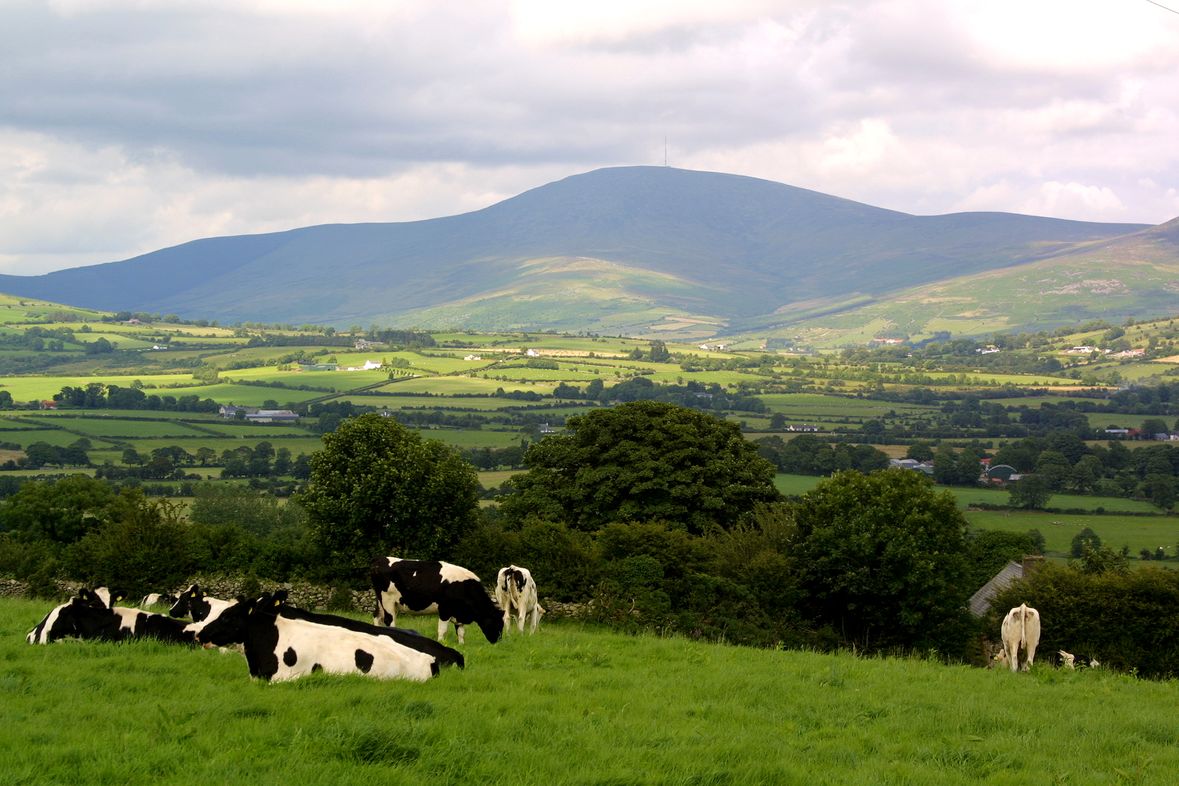 We’re staying inland for our penultimate stop on our tour of Irish mountains. Standing at 2612 feet, Mount Leinster is the highest of the Blackstairs Mountain range and can found at the Carlow/Wexford border. The countryside in this area is truly stunning and is best viewed from the Nine Stones viewing point. From this spot you can see no less than 8 counties; Carlow, Kilkenny, Laois, Kildare, Wicklow, Wexford and Waterford. The vista stretches before you like a rolling patchwork quilt of lush Irish countryside. 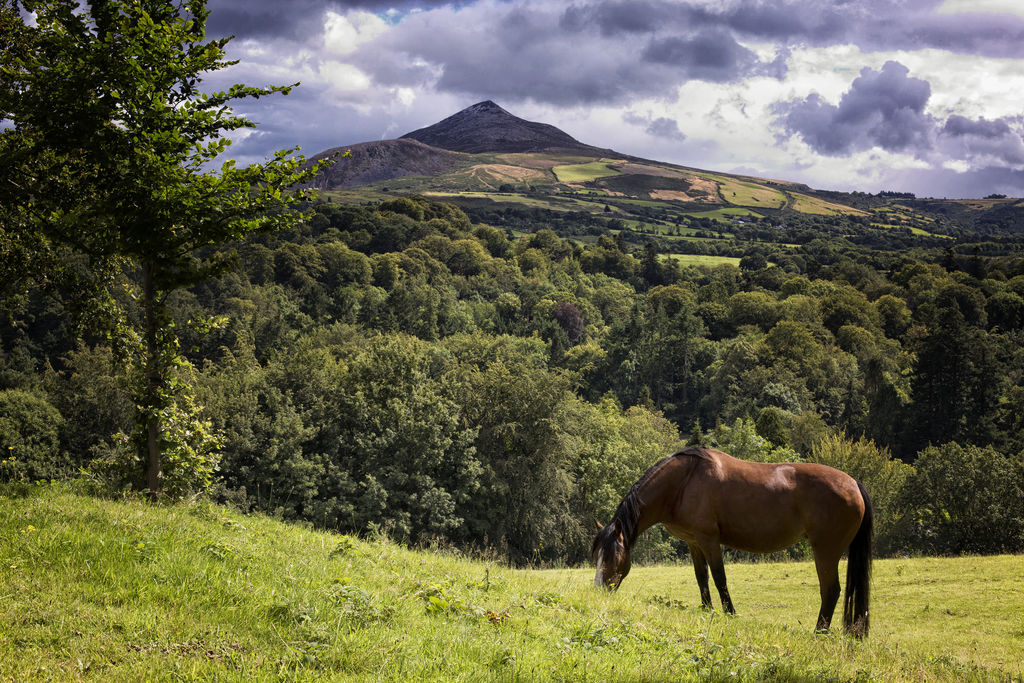 The last of our Irish mountains is in county Wicklow, The Garden of Ireland and home to the much loved Sugarloaf Mountain. Of course The Wicklow Mountains are an absolute wonderland for walkers and cover a staggering 50,000 acres.  It’s such an amazing landscape with it’s heather smothered slopes, swathes of forests, deep lakes and twisting country roads. The highest peak is Lugnaquilla but my personal favorite is the  Great Sugarloaf. I just love it’s fairytale look and the climb is fairly easy!

Well that’s all from me for this week. Don’t forget to drop by next week to continue the journey!

Thank you very much for the lovely pictures and history of the mountains. My husband and I have seen many of them on our trips to Ireland and it was wonderful to be reminded of them again and to see those we did not get to see. Andrea

So glad you enjoyed the blog and it’s great that you’ve been lucky enough to see some of them for real!