Hi Everyone. I hope I find you all well this week. So with spring well and truly springing here n Ireland, I’m taking us on a tour of some of my favorite Irish parks. There’s nothing like walk in the park as the weather turns finer with the trees dressed in their finest green and the flowers bursting into bloom.

First of all we’ll start in the capital. Dublin’s favorite park is an oasis of calm right in the center of the bustling city.  It covers some 22 acres and was first enclosed by a wall in 1664.  Railings replaced the walls in 1814 but access to the park was restricted to fee paying residents.  Sir Arthur Guinness funded the current layout of the park. He was also responsible for pushing an act through parliament to open the park to the public in 1880. Because of this, he was honored with a statue in the park. It faces the College of Surgeons on the south side.

In addition to  the Victorian central formal garden, there’s also a duck filled lake and impressive mature trees as well as numerous artworks including the imposing Wolfe Tone monument at the north east entrance.

So next we’ll head up north to county Down. Tollymore forest park is an absolute woodland wonderland at the foot of the Mourne Mountains. It covers some 1600 acres. The river Shimna runs through the forest and can be crossed by no less than 16 bridges. The oldest one dates back nearly 300 years!

Related:  Journeys Around Ireland With Lulu - Wandering Around Waterford

Go for a hike and be spoiled for choice for a perfect picnic spot. In recent times, Tollymore has become most noteworthy as a key location for the massive hit TV series Game of Thrones.

Staying with the forest park theme, we’ll head across country now to Lough Key forest park in county Roscommon. This massive forest park covers some 1975 acres.It’s also just down the road from my beloved Sligo. You can stroll through it’s lush woodlands while you drink in the tranquillity of it’s waterways . Furthermore, you can zip your way over the canopy of the forest on their thrilling Zipit high-wire course!

It’s easy to see why early medieval monks chose this stunning setting as a place of worship and reflection. Being near to my home in Dublin, it’s one of my favorite places for a relaxing stroll. There’s something truly tranquil and spiritual about this place. 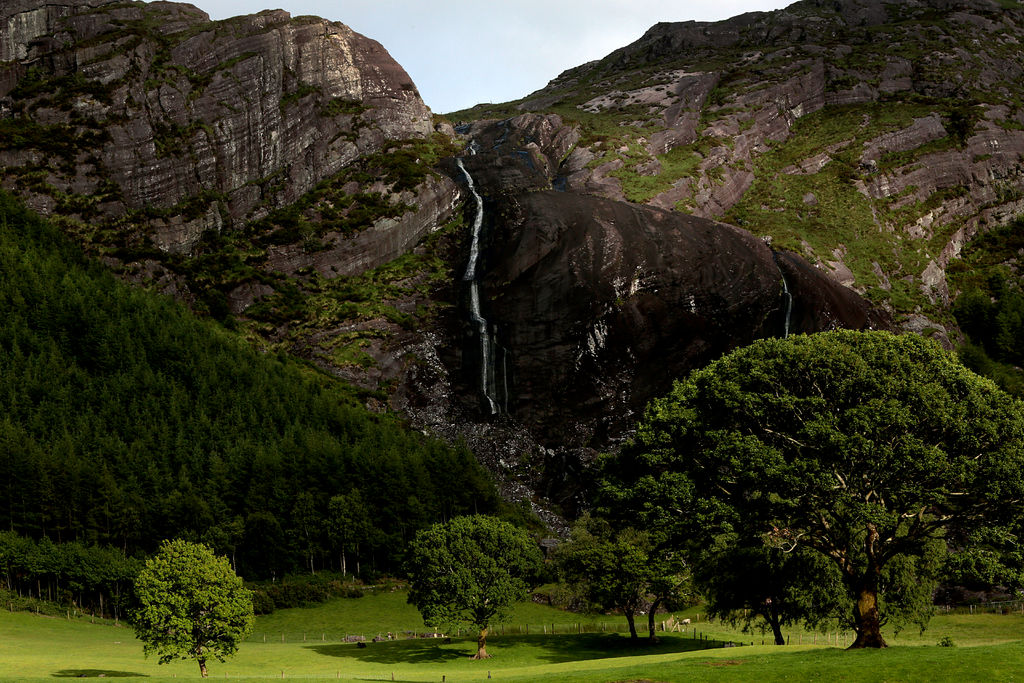 Prepare to be enchanted because now it’s time to travel south to the awesome Kingdom of Kerry. Gleninchaquin Park covers 1000 acres on the Beara Peninsula. The views in every direction are nothing less than stunning. Log bridges dot the babbling streams and there’s tanquil lakes and lush woodlands. And you simply have to climb the carved steps up the mountain side to the top of the 140 meter high waterfall and enjoy breathtaking views over Kemare Bay.

We’ll end our journey at the iconic Phoenix Park in Ireland’s capital city. Probably the most famous of all Irish parks. The park covers some 1750 acres with an 11 km perimeter wall . This makes it the largest enclosed public park in any capital city in Europe. Here you will find the residence of The President of Ireland (Áras an Uachtaráin ) while it is also home to Dublin’s Zoological Gardens.

The park began life as a royal hunting ground in the 1660s and was opened to the public in 1747. A large herd of fallow deer (pictured) thrive to this day. It has to be the best place in Dublin for an invigorating run or a gentle stroll.

Well I hope you enjoyed my whistle stop tour of Irish parks. I think a walk in the park is definitely in order! Don’t forget to shop our not to be missed Spring Clearance Sale while stocks last!