Hi everyone. Well, the big day is getting ever closer – just 3 weeks to go! This week, I thought we could take a look at some of our favourite Irish symbols – symbols that have lasted through the ages as emblems of Ireland and that still inspire Celtic Jewelry design to this day. I love the rich collection of Irish jewelry on offer and I’m constantly searching the country high and low to give you the best of Irish design and craftsmanship.

It goes without saying that we’ll all be proudly wearing our Shamrock jewelry on St. Patrick’s Day, and maybe some of us will drown it a little too! The Gaelic word is “seamróg” meaning “summer plant”. The actual plant is believed to be the White Clover, indigenous to Ireland and regarded as a weed! Rarely, a fourth leaf will appear, giving the famous four-leaf clover and extra good fortune to the person who finds it. Legend has it that the shamrock was considered sacred by the pagan Druids with its triplet of leaves, 3 is a mystical number. The legend continues that St.Patrick then used the Shamrock to explain the Holy Trinity to would be Christian converts in 5th century Ireland.  Whatever the tale, there’s definitely no doubt that the shamrock remains as popular to this day and is everyone’s favourite on St.Patrick’s Day.

This adorable shamrock jewelry set is the perfect way to complete your St. Patrick’s Day look. Crafted from sterling silver in county Kilkenny.

A truly iconic ancient symbol of Ireland. Pagans worshipped the sun and the moon and legend have it that St. Patrick combined their circular symbol with the Christian cross to create the first Celtic Cross as a way of converting the Irish people to Christianity. The stone cross in the image above stands in the churchyard at Down Cathedral, the final resting place of Ireland’s patron saint. 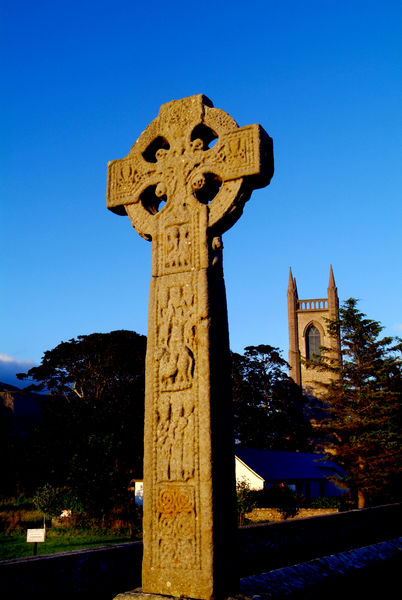 The Celtic cross in the picture below is one of my favourites in the country. It stands in the churchyard in Drumcliffe in County Sligo, the final resting place of W.B. Yeats. Nestled at the foot of the majestic Benbulben, this part of the world holds a special place in my heart and I try to go there as much as I can. There’s something truly magical about the place.  If you look closely, at the foot of the cross you will see stunning Celtic knot carvings, which brings me neatly to another Irish favourite;

Like the Celtic cross, the origin of the Trinity Knot goes back to pagan Ireland were three was the magic number. Christians used it as a sign of the Holy Trinity and it most famously appears in the stunning 9th century Book of Kells which is housed in Trinity College. From Life, Death and Rebirth to the Father, Son and Holy Spirit, the Trinity knot remains an age-old Irish symbol of eternity.

Wear the classic Trinity Knot with this gorgeous Irish pendant and earrings set, featuring stunning freshwater pearls. It’s one of our customer favourites.

If we’re going to talk about symbols of Ireland, then the iconic Claddagh must get a mention. This is one of my favourites, with its enchanting tale of romantic love. The story originates in the tiny fishing village of Claddagh in Galway. According to Irish legend, Richard Joyce, a native of Galway, was captured and sold to slavery in Algiers where he was taught his craft by a Moorish goldsmith. When he was finally released after 14 years, he returned to his home place where his sweetheart awaited him. While in captivity, he had made what we now know as the Claddagh ring especially for her. The heart symbolized love, the hand’s friendship and the crown loyalty.

The branches reach for the sky, the roots reach down into the ground, representing the link between heaven and earth, mind and body and the never-ending cycle of life. An ancient Celtic symbol from Druid times, the Tree of Life has been around for centuries and appears in cultures and religions all over the world.

Wear this age-old symbol with this outstanding Tree of Life pendant. Crafted in stunning detail from sterling silver with a single green stone at its centre.

To finish we have to mention the harp, Ireland’s official emblem. It appears on the Presidential Seal, passports, official documents and Irish coins and appears on the logo for the iconic Guinness brand. It’s history dates back some 1000 years and it is said that Brian Boru, the last High King of Ireland was a talented player. The oldest surviving harp is housed in the Long Room at Trinity College and the official Irish emblem design is based on this. It is known as the O’Neill or the Brian Boru Harp.

Wear your very own little piece of Ireland with this beautiful harp brooch with emerald green edging.

So which is your favourite? Hard to choose I know but whichever one you wear, you’ll be displaying your love of Ireland with pride. Here at The Irish Store, we’ve come up with our very own St. Patrick’s Day pin, the perfect way to keep your shamrock firmly in place on the big day, and we’re sending one free with all orders while stocks last-but hurry! They’re moving fast!

Looking forward to continuing our countdown next week,

Updating an icon: Daryl K takes on the Aran sweater

An Irish Journey. Places Made Famous by St....

Wrap up this Christmas!