Home Culture Something for the Weekend. Our Favorite Irish Songs
Culture

Something for the Weekend. Our Favorite Irish Songs

Hi everyone. How are we all doing? I hope you are keeping well. They say there’s nothing like music to lift the spirits, bring back fond memories and transport you to another place and time. Of course we have a wealth of wonderful songs, singers and musicians to choose from here in Ireland. But how to choose a favorite? Well for me it’s nigh on impossible and I’m sure like many of you, those choices change from week to week! So I’ve opened it out to The Irish Store Family and below is a list of our favorite Irish songs as voted for by all the team. Unsurprisingly, U2 features very highly and there’s a few toe-tappers in there to get you dancing round the kitchen this weekend-Irish style!

So next up on our list of favorite Irish songs is the first of three offerings from Ireland’s most famous rock band, U2. Where The Streets Have No Name comes from their 1987 album, The Joshua Tree and remains a perennial U2 favorite with its infectious guitar riff. The Grammy -award winning video was filmed on a rooftop in downtown LA. Takes me back to my youth in Dublin city. Ah great days.

8. Whiskey In The Jar – Thin Lizzy

An Irish classic and one that has been covered by numerous artists including Metallica and of course the much loved version by The Dubliners. We’ve chosen the 1973 version by Thin Lizzy with a soaring vocal by the legendary Phil Lynott.

Related:  Get ready for your Irish Trip! Learn the Irish Language!

In at number 7 it’s our second track from Irish super group U2. It also comes from the Joshua Tree album and was a huge hit. It ranked at number 93 on Rolling Stone’s 500 Greatest Songs of All Time.

6. The Green Fields of France – The Fureys

Next up we have The Green Fields of France written by Scottish folk singer/songwriter Eric Fogle in 1976. Also known as No Man’s Land or Willie Mc Bride, the song reflects on the life of a young soldier who has lost his life in World War I. We’ve chosen this stirring version by The Fureys.

Rocking in at number 5 it’s Zombie by The Cranberries featuring the unforgettable vocals of Dolores O Riordan who sadly passed away too soon in 2018. It comes from their second album, No Need To Argue and this powerful protest song recently became the first song by an Irish band to surpass one billion hits on YouTube.

4. The Foggy Dew – The Dubliners

So despite no less than three entries in our chart, our final track by U2 doesn’t take the number one spot. Our favorite U2 track is the rousing One from their 1991 album Achtung Baby. Another Irish rock classic that never dates.

Related:  Photos of Ireland: Then and Now

2. Rocky Road to Dublin – The Dubliners

Rocky Road to Dublin comes in at number 2. This song dates back to the 19th century and has a traditional slip jig rhythm. It’s impossible not to tap your feet to this infectious tune! This is also the second appearance of The Dubliners in our top 10. Luke Kelly’s voice is simply incomparable.

1. Nothing Compares 2 U – Sinead O Connor

And at number it’s Sinead O’Connor with Nothing Compares 2 U! Prince wrote and composed the song in 1985 but it was O’Connor who made it famous with her 1990 version. The ultimate break-up song, it features an outstanding heartfelt vocal by the young Sinead and who could forget that video?

So there’s our top 10. I’m sure there’s something in there to suit all tastes and ages. I’d love to hear your favorite Irish songs. Maybe I could do a blog on the top Irish songs as voted for by The Irish Store community. Let me know your favorites in the comments below.

Mega Memorial Day Sale Up To 60% Off 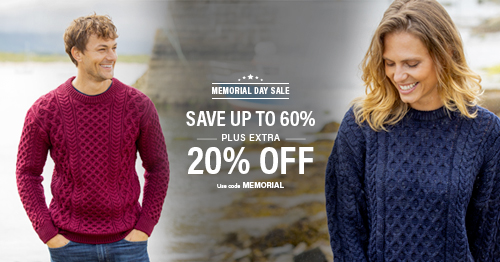