Journeys Around Ireland With Lulu – The Delights of Wexford

Hi everyone and greetings from the gorgeous county Wexford in Ireland’s sunny southeast. After our Wicklow trip last week, I thought we’d head over the border and explore some of the delights that Wexford has to offer. As ever, the choices are endless so my picks are just the tip of the iceberg!

On Hook Head at the tip of the Hook Peninsula stands the 800 year old Hook Lighthouse, the oldest operating lighthouse in the world. When you climb the 115 steps to the balcony, the views are absolutely breathtaking! The peninsula itself has been the first point of contact for many visitors to Ireland for centuries, from the Vikings to the English. The popular saying ” by hook or by crook” is said to come from Strongbow, one of the leaders of the Norman invasion of Ireland who was said to have told his men to land ” By Hook or by Crooke” on their way to gain control of Waterford in 1170.

2.A Night At The Opera

Wexford town nestles on the banks of the River Slaney and is a goldmine of historical buildings, twisting medieval lanes and the stunning National Opera House. The building began life as the Theatre Royal in 1832 and is now home to the award winning Wexford Festival Opera, staging stunning productions and ensuring Wexford’s place as a world class opera destination. A visit to this amazing theater never fails to impress!

Small but perfectly formed,  sitting high atop the town  is Enniscorthy Castle, one one the only castles in Ireland with access to it’s roof, offering spectacular views. You can also explore the depths of the dungeon to see medieval wall art as well as view displays of the work of the celebrated Irish architect and designer Eileen Gray who was a native of this fine county. Her furniture designs are exquisite and we see her influence everywhere today.

No visit to Wexford would be complete without a trip to the quayside in New Ross where the eternal Emigrant Flame burns brightly. Lit from President Kennedy’s grave in Arlington, it is a tribute to all the Irish men and women who left their homeland down the generations to seek a new life, no more so than in the USA. It is from this very spot that President Kennedy’s great grandfather set sail for America in 1848, 4 miles from his home town of Dunganstown.  Nearby there’s a podium where you can read the President’s iconic speech to the people of New Ross when he visited in 1963.

Still on the quayside in New Ross, you can step onto the Dunbrody Famine ship. This stunning reproduction hosts a really impressive tour which re-traces the footsteps of the many famine emigrants who boarded these fateful vessels and pays tribute to this dark time in Ireland’s history.

Last but certainly not least are the truly magnificent Saltee Islands. For me, this has to be the jewel in Wexford’s crown. A 40 minute boat trip from Kilmore Quay (weather permitting!) and you’re in a truly unspoiled piece of Ireland. The humans left in the early 20th century but the birds have taken over, making this one of the most important bird sanctuaries in the world. The sight of flocks of puffins, gulls and gannets on the sea cliffs is truly awe-inspiring and there’s even a population of grey seals. A truly magical place.

Well it’s time for me to sign off now. I’ll see you next week and we’ll keep on trekking through this beautiful country. Remember-you can shop all things Irish at The Irish Store and use BLOG10 at the checkout to get a 10% discount.

Journeys Around Ireland With Lulu – Wandering Around Waterford

7 Wonders of Ireland. Journeys Around Ireland With...

Happy Holidays to All! Christmastime in Dublin.

A History of Irish Jewelry 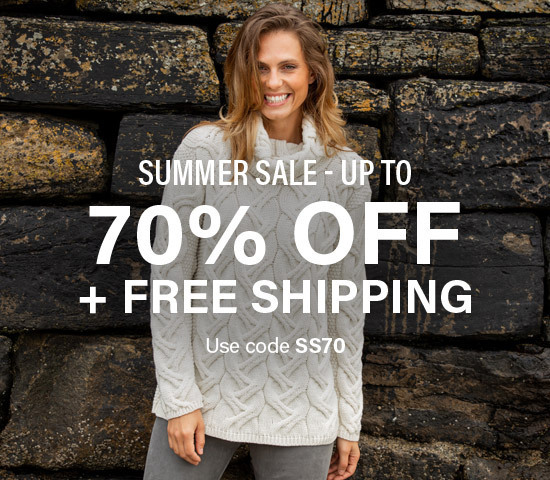