Gorgeous Gifts from Ireland. The Ultimate Guide to Irish Jewelry.

Dear Friends. I hope you’re all keeping safe and well. I send my heartfelt good wishes to you and yours the world over. Despite these challenging times we’re doing our utmost at The Irish Store to bring you a little piece of Ireland. One of our most popular ranges with The Irish Store family is our collection of Celtic jewelry so this weekend we’re offering 30% off selected lines. I’ve chosen some of my favorite pieces featuring much loved Irish symbols such as the Claddagh and the Trinity knot. There’s also a short history of these cornerstones of Irish jewelry design.

Firstly, it’s everyone’s favorite Claddagh. The Claddagh is almost certainly the most popular symbol in Irish jewelry. The story of the Claddagh dates back some 300 years to the fishing village in county Galway of the same name.

Legend has it that Richard Joyce, a native of Galway, was captured and sold to slavery in Algiers. While there, he was taught his craft by a Moorish goldsmith. William III, the then king, sent an ambassador to Algiers. The ambassador arranged the release of all British prisoners. Richard Joyce was one of those prisoners. He was finally released after 14 years and returned to his home place where his sweetheart awaited him. While in captivity, he had made what we now know as the Claddagh Ring especially for her. The heart symbolizes love, the hand’s friendship and the crown loyalty.

Our Claddagh jewelry set (pictured above) is exquisitely crafted from sterling silver and features beautifully detailed filigree work on the pendant and matching earrings.

So next up it’s the ever-popular Celtic Trinity Knot. The Celtic trinity knot dates back to the 5th century. It was used extensively by ancient monks in illuminated manuscripts such as the Book of Kells and the Book of Durrow. It is symbolic of many things that are threefold and has long been considered a symbol of eternity.

The Trinity knot pendant pictured above is impeccably crafted from sterling silver. The perfect Irish gift to that special someone. Made in Dublin, Ireland.

So many stories and myths surround the origins of the Celtic cross design. My favourite story centres around St Patrick. On seeing a pagan standing stone imprinted with a circle which represented the moon goddess, he blessed the stone with a Latin cross.  As a result, the first Celtic cross came into being.

The ancient Irish symbol of faith and worship is recreated in glorious detail in this stunning pendant. The central stone is crafted from Ireland’s unique and ancient gemstone, Connemara Marble, 900 million years in the making. Beautifully accented with sparkling marcasite stones. Handcrafted in Ireland from sterling silver.

Every Celtic brooch takes inspiration from one of Ireland’s most precious archaeological finds, the Tara Brooch. Discovered in 1850, it is now displayed in the National Museum of Ireland. This stunning Celtic pin draws inspiration from this rare and ancient Irish treasure. Handcrafted in sterling silver with 18 karat gold details and featuring classic Celtic knot designs.

Ok so they’re not strictly Celtic jewelry but rosary beads are hugely popular with many of our customers and these beads are simply stunning. They feature striking square beads and a woven cross, carved from 900 million year old Connemara Marble. The medal commemorates the apparition at Knock.

Remember there’s 30% off all the above pieces for a limited time for all blog readers. Use the code JEWEL30 at the checkout.

Take very good care of yourselves and each other,

Enjoy A Taste of Ireland from the Finest Irish Homeware

Hello! I have a question and researching on the internet is proving to be difficult. My Husband was watching an old movie. A person in a scene stated, “Oh You are from County Cork. You’re wearing the crucifix of County Cork”. My question is this… is there such a thing of each Counties having their own cross symbol stating their County liken the tartans symbolizing the clans? I am really curious. Thank you

Thanks for your inquiry. This is a new one on me-I have never heard of individual counties having their own cross. I’ll delve a little deeper and I’ll keep you posted if I come across any more information on this.

Thanks for reading. The Claddagh can be given as a token of love or friendship with the crown for loyalty , the heart for love and the hands for friendship. The trinity knot is a cornerstone of Irish jewelry and is often given as a sign of eternity.

My mother’s family is from County Cork. I am wondering if each county has its own knot (similar to my Scottish clan symbol on dad’s side), or if the items described above are generally symbolic of Irish beliefs or sentiments?

As far as I know the symbols are general symbols of the Celtic culture in Ireland. The Claddagh of course originated in Galway. 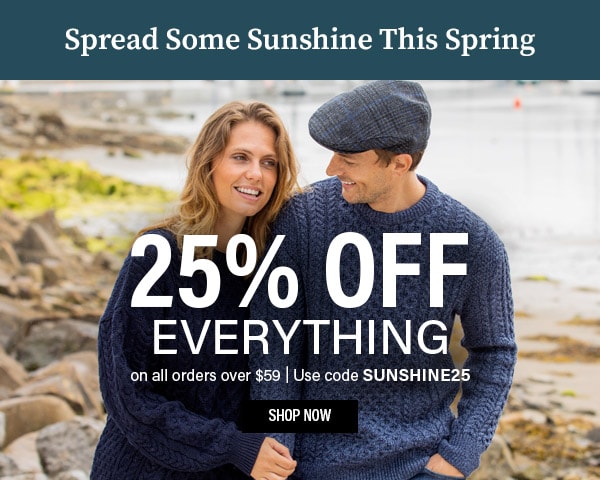