I ‘m so excited this week to be taking a trip with you to the wondrous county of Meath. Once a province in itself, it is also known as the Royal County as it was once the seat of The High Kings of Ireland where they ruled from the Hill of Tara. There’s an embarrassment of ancient riches here with the World Heritage Site, Brú na Bóinne taking centre stage. Let’s begin with it’s a most iconic monument.

Truly awe-inspiring, the passage tomb at Newgrange hails from the Stone Age and was built some 5200 years ago, predating the Pyramids and Stonehenge by some 500 years. Measuring 85 meters in diameter and 13.5 meters high it is surrounded by 97 kerbstones bearing stunning examples of megalithic art. Its passage and chamber are aligned with the rising sun at the Winter Solstice on 21 December when they are spectacularly illuminated. A stunning feat of ancient engineering!

Although lesser known than Newgrange, the Knowth passage tomb also at the Brú na Bóinne site is no less impressive. At 40m in length, its eastern passage boasts the longest megalithic passage in Western Europe as well the largest gallery of megalithic art.

The Hill of Tara

The ancient seat of Ireland’s High Kings, the summit of the Hill of Tara is marked by the royal enclosure known as the Fort of The Kings. Two earthworks, Cormac’s House and the Royal Seat are linked by a central standing stone known as Lia Fáil (Stone of Destiny). Legend has it that when a true king held the stone, a piercing shriek could be heard in the four corners of Ireland. It was also near Tara that one of Ireland’s ancient treasures the Tara Brooch was discovered in 1850. Dating back to between 650 and 750 AD, it’s designed is timeless and remains a popular piece of Irish jewelry to this day. Here’s one our favorites here at The Irish Store.

The Hill of Slane

We have to stop by Slane while we’re in this historic county. Legend has it that St Patrick taught the Holy Trinity on this hill using the shamrock. I just love this image of the silhouetted ancient Celtic crosses at sunset. Simply stunning.

I know we do great castles here in Ireland but this has to be one of our finest. It is the country’s largest Norman castle covering an area of 30,000 square meters and dates back to the 12th century when it took 30 years to build. More recently, it featured in the Hollywood movie Braveheart.

Next on the itinerary is Kells Abbey which gives Ireland’s most precious national treasure, The Book of Kells its name. Now housed in Trinity College Dublin, this illuminated Gospel book is one of the finest examples of medieval art in Europe and has been a strong influence on many jewelers and craftspeople throughout the island of Ireland, not least the experts at Galway Crystal. The crystal pattern for their classic Kells Collection takes inspiration from this ancient artwork.

You all know how much I love a beach walk so I think we’ll finish off our trip on one of Meath’s finest. Laytown beach forms part of a stunning 12 km stretch of sandy coastline in County Meath and is home to the only officially recognized beach horse race meet in Europe.  The perfect way to unwind after exploring the heart of Ireland’s ancient east.

As always, thanks for the company. Looking forward to our next trip!

In the meantime why not visit The Irish Store’s collection of Irish sweaters, Irish jewelry and Irish gifts and grab a 20% sitewide discount and a free gift at our Labor Day sale! Just use the code LABOR at the checkout. 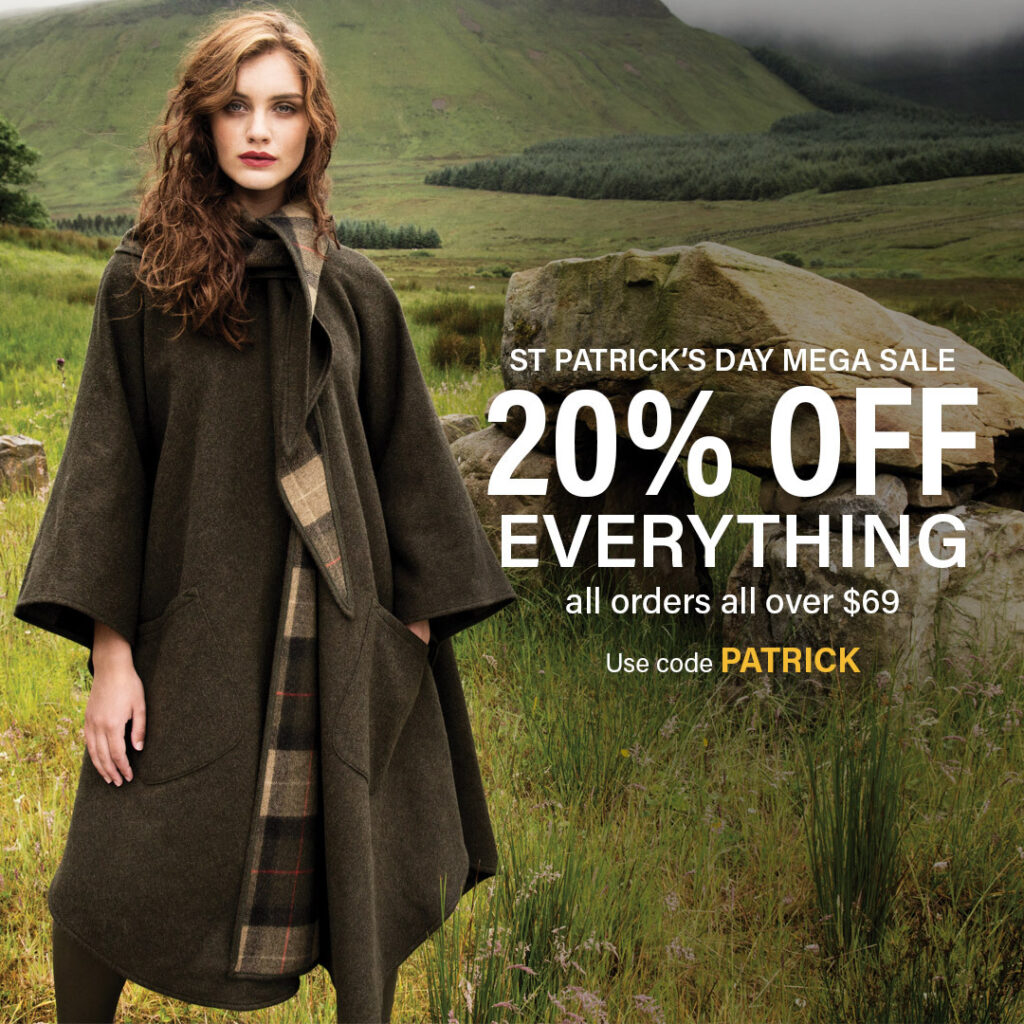